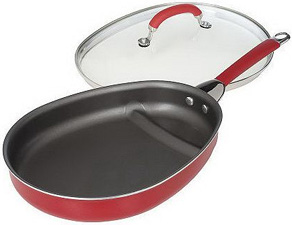 I hate getting presents because usually I end up with random junk I don’t need at all. But for my birthday this year my mom gave me a Ming Tsai Fusion Pan, and I was actually really excited to try it out! So far I’ve made three things in it, so I figured I’m qualified now to write a review.

The pan is a really good idea. It’s sort of an egg shape, and there’s a little “well” in the narrow end where you can put water to steam your food without having it sit in water itself. Or you can put some other flavored liquid in the well (like soy sauce, or liquid smoke) to infuse the flavor in whatever you’re cooking. I have the blue pan, which is a really fun color, but I have to complain here: after the very first use, the paint on the bottom of the pan had burnt off (and was on the burner of my stove, though I was able to remove it). I don’t know if the heat was too high or what, but considering you’re supposed to be able to put it in the oven up to 350 degrees, I think you should be able to use it on the stove without paint peeling off. The pan is really heavy, but not unmanageable, and there are nice rubber grips on the handle of the pan and the lid.

The first thing I cooked was the asparagus recipe that comes with the pan. It’s minced onion and asparagus, with water in the well, and it turned out great! I love me some broiled asparagus, but this is a great way to do it, too – steamed without getting floppy. That same night I made the steak recipe that it came with. The steak was marinated with some soy sauce and ginger, and then cooked with green beans in the pan and soy sauce and liquid smoke in the well. The steak actually turned out pretty nice, but the green beans were not my favorite. (I think I was turned off because they got a little sickly brown looking from being “infused” with soy sauce.)

Last night I did my own pork dumpling recipe in the pan, and they were fantastic! I was able to just put a little oil in the bottom, and some water in the well to steam them. Even though you’re supposed to, I never steam these dumplings when I cook them because they get all wet and floppy. But by keeping the water in the well they stay crispy. They cook really quickly, too (a little too quickly – I burned the first batch).