I don’t want to jinx anything, but… I just had some really lucky days, after a string of terrible ones!

Our sewer line clogged last week, I had someone snake it, and they found tree roots in the line. After lots of phone calls and plumber visits over the next few days, I wasn’t sure exactly what to do – most plumbers wouldn’t do the job, and the one estimate I got was way higher than I expected. But then I learned I live in one of the few municipalities in which the township is responsible for the sewer line past the curb. They re-checked with a camera, and found all the roots were under the street! So the township is coming this week to give us a whole new sewer line, at no cost to us (I mean, we pay taxes, so…)

Earlier this month, a customer paid for a huge purchase with a check. I usually don’t accept checks, but something had happened to her credit card so she was waiting on a new one, she had shopped with me before online, and our mutual friend vouched for her. I deposited it as soon as I got home. Well, last weekend the check came back to me in the mail, returned due to insufficient funds. I tried contacting her via e-mail, phone, and text, plus our mutual friend tried to get in touch with her. She did reply at one point, but then stopped responding again. When our mutual friend sent me a photo she’d shared on Snapchat with one of her new items that she hadn’t paid for, that was the last straw. Friday was her payday, I knew the money was in her account, and first thing Saturday I took the check back to the bank and had it cashed again – this time for real!!

GG and I have been planning our summer vacation, and because rates at the hotel we wanted to stay at had gotten so high, we ended up finding a 2 bedroom condo on Airbnb for the about same price as the original hotel rate. Saturday morning I woke to a message on my phone saying the reservation had been cancelled by the host. I sent him a message asking if this was a mistake, and he said one of the hotels in their town was suing all the Airbnb hosts, and the site recommended that they cancel all their pending reservations until it was resolved. So GG and I started looking for another place to stay, and ended up finding a much better rate on the hotel we originally wanted, so we were able to book it after all!

I went to a Norwex party my friend hosted on Saturday. I love these demos because they do crazy stuff like rubbing butter all over windows, slathering raw chicken on countertops, and breaking raw eggs everywhere – then they clean it all up! This consultant actually was really good, she had a special pen that would change color in the presence of protein, so she could prove that all the chicken juice had been removed ;o) She did a game where everyone could choose a plastic Easter egg from a basket, knowing that there was a possibility your “prize” would be to commit to hosting your own party; other prizes were free shipping, or a little giveaway item. I won the big prize – a free EnviroWand! (I’m so excited because I really need to dust better! I also ordered the Dusting Mitt, which is supposed to be great for blinds..!)

In addition, GG and I had a nice weekend together – Friday night I saw him play with the (awesome!) band he formed with some of his friends and coworkers; Saturday we went out for a nice dinner at Seasons 52 to celebrate all the lucky things that happened (even the dinner was lucky: it was mostly paid for with a gift card I got for free with my expiring Marriott points); and Easter was nice on Sunday, we saw both of our families and ate some amazing food :o) 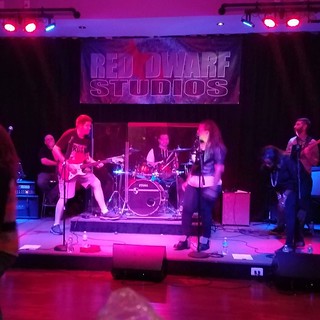