Several years ago, GG turned me on to this cool band from Israel, Project RnL. They have a lot of great YouTube videos and are really just musically amazing. The singer is incredible, and their keyboardist/bandleader does a lot of neat stuff aided by the computer. GG of course is blown away by the guitar player. They didn’t have an album or anything, but we pulled the audio off all the videos we could find and have listened to them for a while.

Fast forward to last week. I subscribe to e-mail alerts on upcoming concerts based on bands I like. Usually I just delete these because the results are totally random, but last week I opened one and saw that Project RnL would be playing not only in the US, but on the east coast! But it was a Tuesday night, two hours away, the show was pretty early, and GG usually has to stay at work late. I figured it would never work out, but sent him the info and he was game. He said even if he was running late, there’d probably be an opening band or something we could miss. So we got tickets, luckily the blizzard had already come and gone, and it’s one of GG’s less busy weeks at work so he was able to get out at a reasonable time, grab me, and get on the road to north Jersey!

The show started at 7:30 and we walked in at about 7:35. It was very quiet, and the venue was not what I expected. It was just sparse tables in a room with very cool decor, and a stage decorated like a circus sideshow. The crowd seemed to be mostly middle aged male prog rock fans, but there were a couple ladies sprinkled in. There was no opening act, it was a full night with Project RnL! It was just really quiet and intimate, and when the band took the stage, it was a personal performance to a crowd who really wanted to be there and sat quietly. My ideal viewing experience!

They opened with Twisted Truth and Moves Like Jagger, played for about two hours straight, closed with Slim Shady (which was really amazing and funny live), and came back for a quick encore featuring Avenger. They played every original and cover song of theirs that we could think of, except one ;o) I also loved Bad News Jitterbug, which I hadn’t heard before, but they did this cool thing where every band member ended up beating on a drum at one point, and it was very impressive live! They do a lot of technical computer stuff with their backing tracks and pre-recorded harmonies, and besides one minor hiccup, all went smoothly :o) 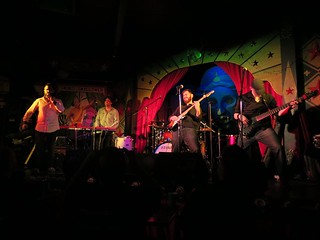 After the show, we were able to meet all band members but the drummer. And they are all super nice! They seemed flattered that we trekked up from Philly to see them, but we were equally excited that they were in the US at all! The singer, Ray, shared that they were planning a US tour in a few months, so we will definitely keep our eyes out and hope they play somewhere closer to Philly! (He was asking us about what other cities are north and south of us; when he asked what was west, GG and I were both like, “Nothing.”) 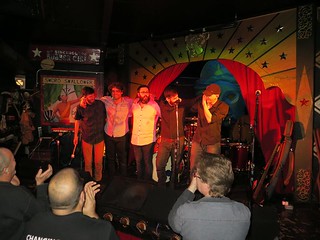 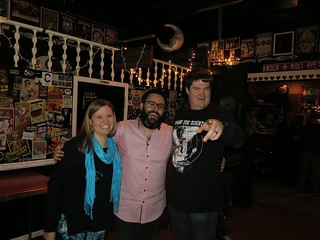 In addition, we ended up sitting next to Ron Bumblefoot Thal, former guitarist of Guns N Roses, who chatted music and guitar gear with GG during and after the show! (He was super nice, like really really nice and friendly!) 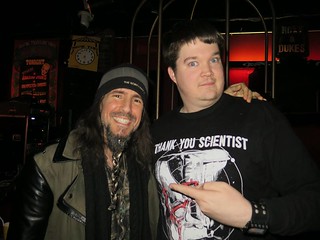 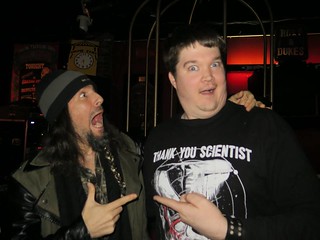 PS: Thank You Scientist, whose t-shirt GG is wearing above, is local to the area and we thought they might be at the show. Bumblefoot actually teaches the guitar player! He was texting them, but he had their own rehearsal until 10PM and couldn’t come!!!

PPS: According to their web site, RnL stands for “Rock n LOL,” referring to the humor in their approach to music. However, when GG asked what it stood for, keyboardist/co-founder Eyal said the definition changed every time, and that day it was “resonant nearby laughter” :o)