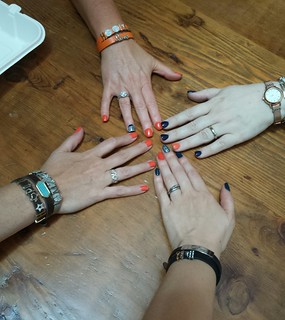 When I joined my second side business last year, I decided, no matter when or where it was, there was no way I would miss this company’s very first conference. Well, it was last weekend and it was amazing! Compared to being with 15,000 women last year, being with just 500 was very different. But it was such a great experience. The speakers and training and product demos could have been anywhere. But the best part was that many of us had been with the company since Day 1, and we knew each other online, and it was so awesome to finally meet these women in person! That was really the main highlight for me, because honestly, by the time conference rolled around, I was questioning whether I wanted to go or to stick with this at all, but having met those women, I am going to make the effort to keep with this as long as I can :o)

I was supposed to fly to Dallas on Thursday with another Designer from my area, but she ended up cancelling at the last minute due to some family issues. So I traveled by myself, and then it turned out my Director arrived at the airport about the same time I did, so I got to meet her for the first time (she’s amazing, more on her later) and we shared an Uber to the hotel. Oh, and Uber! The hotel was really not walking distance to anything, so this is the way we got around town all weekend, and it worked out great! Thursday we mostly hung around the hotel and greeted people as they arrived. A bunch of us went out to this Mexican place for dinner, and I’m sure it would have been really fabulous, but by that point, between traveling and a slight time difference and just the long day I’d had, I really wasn’t feeling well, so I barely touched my food. I just crashed in bed. 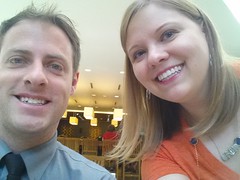 Friday was the day most people were arriving, so again we kind of claimed a spot in the hotel and greeted people as they arrived. The co-founder and “Customer Advocate” of Tiny Torch happened to be in town for another conference, and I was able to get him to come by and do a little meet and greet with some of our Designers! Ok, it was mostly with me, but it was great to meet him in person, he’s a super guy, and I think it at least piqued others’ interest in the service – there’s been a lot of interest and questions since I’ve been home, so I will be putting together a little guide to show people how I use TT to organize my businesses and schedule. 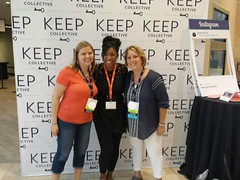 Check-in opened, and we all got our swag bags full of new product! Plus, we were able to meet home office staff who, again, we’d been interacting with for the past year. Leadership training was during the day Friday, so the rest of us had free time until our first general session that afternoon. That night was our “team party,” which my director hosted in her suite (I got to help set up cupcakes!). Really cool to meet the whole team and celebrate accomplishments within our group. 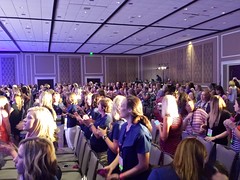 Saturday started early with lots of training and special announcements. It was a long day of sessions, and then I went out with some other girls from my team for dinner at this cool diner. (Anytime in this story that I’m not mentioning where we ate, it’s probably because I had a meal from one of the food trucks that lined the sidewalk outside the hotel. Again, it was kind of removed from everything, so the trucks were really the only option if you didn’t want expensive hotel food, and didn’t have time to go out somewhere.) 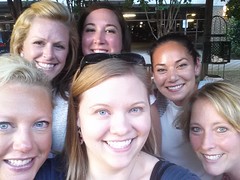 After dinner, it was time to get ready for our dance party! This was a really nice event, we had a whole big ballroom in the hotel with DJ and dance floor, photo booth, little sweets and cakes, cash bars featuring a special cocktail just for us, and lots of ladies just going nuts meeting each other and getting pictures.

I got to meet a Designer who joined in the very beginning with me, and we actually spoke on the phone when we first were starting because she had never done anything like this before and was nervous. Guess what – she’s now one of the top Designers in the company! I hadn’t had a chance to meet her before because, as a leader, she had been kind of segregated from us, so it was so awesome to meet and congratulate her in person! Also hung out with my roommate (not on my team) and some other local Designers from PA, and we are going to try to hook up back home! 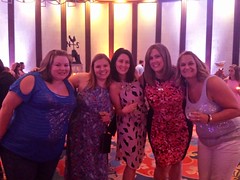 Our last day, Sunday, got off to kind of a slow start – I think some people were partying a little too hard at the dance party! Our “Chief Happiness Officer” serenaded us on his saxophone, then gave a really inspirational speech (which I think had the unintended effect of inspiring me to do something else, but .. at least it was inspirational). Everyone slowly started checking out and making their way home. This time I had a travel companion (my roommie), and our flight wasn’t until later, so we checked out and then hung out in “our” spot in the hotel, saying goodbye to people. (Cool thing that happened: I was there in the lobby and saw a home office person I recognized and hadn’t met yet. Hoopla was officially over, but I just went over and said I wanted to introduce myself and thank her for all she did for us. “I said, “You don’t know me, but my name is [first name],” and she said, “Oh, [first name last name]?” That just made my day – she knew me too!) We got an alert that our flight was delayed, but still headed to the airport at the scheduled time anyway, sharing a shuttle with another girl from my team who we just met there in the lobby! We grabbed dinner at the airport and killed some time before heading to the gate. Somehow, despite being delayed, we made up time in the air, and actually arrived home a little ahead of schedule! GG not only picked me up at the airport, he actually came inside to meet me, which was really sweet :o) 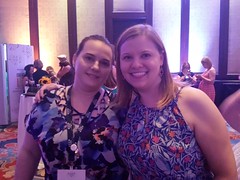 And since there wasn’t a good place in the narrative to include this, I will just add that my director is an amazing woman. The more time I spent with her, the more I learned about her. She’s had such an unbelievable life, and is really an inspiration. She lives every day with a condition that basically feels like she has a permanent migraine, and will probably someday need brain surgery, but still takes care of her family and has had such amazing success in her business. She has experienced heartbreaking losses. Her three children are fabulous, and she has been a surrogate, carrying pregnancies for other families, multiple times! But the main thing I love about her is that she is not like most of the other leaders in this company, all “rah-rah” and sometimes aloof. She’s just a normal person who does not like being in the spotlight, who has achieved great success and knows that we all can, too.