OMG, I updated my WordPress theme! I have been wanting to change it for a long time, but never got around to it (see also: the frequency with which I update this blog!). Lots has changed in the last 8.5 (OMG!!) years – it’s way easier now to install and customize a theme. Why did I wait so long?!

While I’m in an updating mood, let me tell you what’s been going on lately. I had my band concert at the beginning of the month. It was fine. Usually there is at least one piece that I’m really excited to play, and even if I don’t like all our selections at the beginning of the season, several more will grow on me. However, that never happened this spring. So I guess it went well, I just didn’t particularly care :o/ Afterward, GG and I took my grandmom out for dinner, which also counted as her Mother’s Day celebration, because I couldn’t coordinate a time with her and my mom to celebrate.

The following weekend, GG and I were supposed to go to this bacon festival, but it’s been postponed until October! (Based on feedback about another bacon festival that took place the weekend before, it sounded like that was a good idea, so they could have enough time to better organize the event.) Then it turned out that my brother was going to be in town on Mother’s Day, so I did end up seeing my grandmom, and my mom, when we all got together for hoagies. 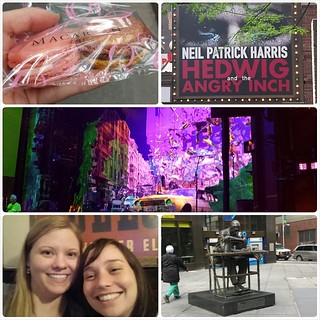 The weekend after that was opening day for our local farmer’s market, plus it was the day of the compost bin and rain barrel sale for our county, so I went with GG and finally got my compost bin (I’ve wanted one for a few years, but was never able to go to the sale)! And we hit up the farmer’s market and checked out some new vendors. On Sunday, MB and I went to New York to see “Hedwig and the Angry Inch” with Neil Patrick Harris on Broadway! She called me after her birthday party to tell me that some of her coworkers had given her a pair of tickets, and I started telling her about the show and what a great time she and A would have. Then she was like, “Actually, he doesn’t want to go… so do you want to go with me?” Um, yes! Besides the craziest blister I’ve ever gotten, we had an awesome day! The weather was perfect, we picked up some gourmet macarons before the show, the show was amazing, we got dinner afterward at a neat Belgian restaurant, and everything worked out with getting the train to and from NYC. Loved hanging out with my chicklet for the day!

So now we’re coming up to the end of May already, which I can’t believe! My goals for Memorial Day weekend are to put my office back together (I’m reorganizing after getting a new desk and rearranging the furniture a little, but I think it’s going to take a little longer than I intended…) and finish some freelance design work (which might also take longer than intended, because I am missing a key piece of info from my client, who is now on vacation). Other than that, I am just relaxing, because June is going to be crazy!