Besides our impromptu trip to New Hope, we did some other exciting things this month:

We just had such a beautiful weekend, and since the weather was so nice and it was our last free weekend for a long time, I suggested to GG that we go up to New Hope on Saturday. We haven’t taken an overnight trip there in a few years, but we do still like to go up a couple times a year for a day here and there. Unfortunately, everyone else had the same idea! There was almost nowhere to park in town, and the sidewalks were so crowded, people had to squeeze past, single file. But it wasn’t really unbearable, and it was such a lovely day, we had a great time! 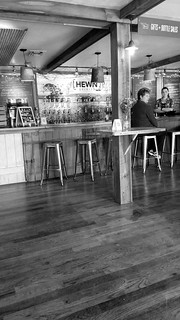 We both had some things to take care of at home first, so we didn’t get on the road until about 11 AM. There’s a new highway bypass (well, I call it new, it’s been open for several years now), which shaves a bit of time off the trip and makes it quite a pleasant drive. We first stopped by Peddler’s Village in Lahaska, because GG wanted to go to Hewn Spirits and see if their Reclamation whisky was in stock (it was not). There also happened to be a spring fair going on, so there was this whole other area with vendors and tents set up nearby and throughout the village. One of the booths we stopped by was Offbeat Gourmet – let’s just say, he had the whole “handmade hipster” thing down so well, when he gave me change for my purchase, it was a $2 bill from a homemade cash box.

We continued over to New Hope. Unable to find a parking spot in our usual favorite lots, we ended up parking near the canal lock at the north end of town. We had thought maybe we’d get an early dinner before leaving. Last time we were there, someone recommended the Blue Moose Cafe, but they might have been closed or all booked for the day. We stopped by there first but they were serving brunch, and then would be closed until dinner at 5PM. So GG went in and made us a dinner reservation for 5. 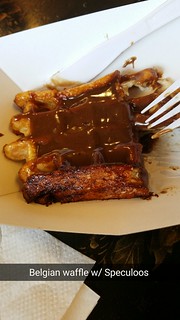 Next order of business was to get a little snack to hold us over until then! We went to Nina’s Waffles for a little Belgian waffle and ice cream action. Then we just took a few hours walking through town, seeing what’s new and checking out our old favorites. We don’t usually walk east on Bridge St., but happened to go up that way and found The Creeper Gallery, which we’ve somehow missed for the couple years it’s been open! If you like weird taxidermied animals, Victorian baby photos, and general creepy artwork, check this place out! And of course no visit to New Hope would be complete without stopping in at Farley’s Bookshop to see Butter the cat (and, um, look at books)… We usually have to look for Butter, but this time he was sitting out right in the middle of the children’s department. On a nearby chair, there was a notebook titled, “Dear Butter,” which featured a couple pages of cat FAQs, followed by blank pages for people to leave notes. GG wrote a very nice message from us. I gave him lots of scratches and he purred a lot. 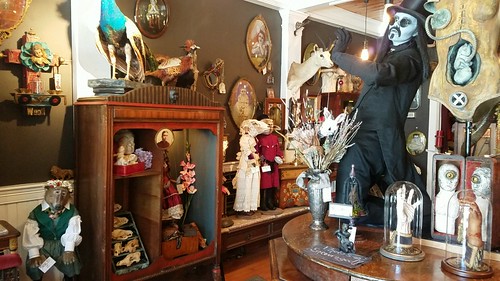 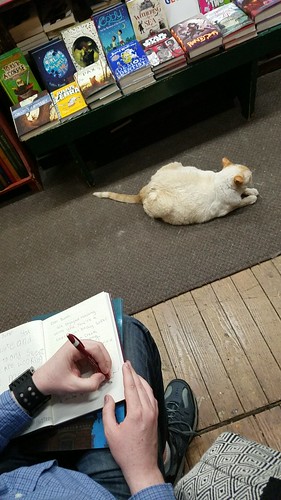 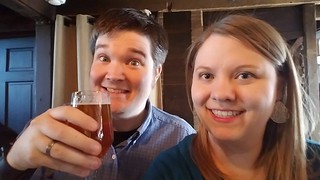 We were pretty beat after a while, so we sat down on a shady bench for some people watching/possibly a nap, but there were a lot of bees around! So we ended up going to Nektar for some drinks. It was across the street from where we were having dinner and we’ll definitely have to have a meal at this place soon! We went there several years ago when it was Wildflowers, but this is a totally new restaurant with new owners, and it looks pretty awesome! 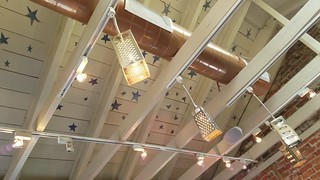 Finally it was time to go over to the Blue Moose. I hadn’t been in there before, but the decor was pretty cute! Their door handle (and logo) is a whisk with moose antlers; pendant lights were made of box graters; there was a window box of flowers made from forks, knives, and spoons… It’s a BYOB restaurant and you can choose a two or three course prix fixe menu (some dishes do have an additional charge of a couple bucks), which is a neat way to do things. The third course is dessert, so we skipped that. 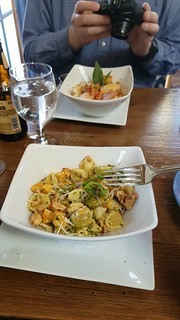 For our first courses, GG and I shared the cheese plate and Sweet Potato Nachos (which were awesome and I will definitely try recreating at home!). Then for our entrees, he had the Seafood Jambalaya (the scallops were so perfectly golden, I thought they were breaded!); and I had the Oricchette with roasted brussels sprouts, butternut squash, and a lemon cream sauce. After that, we made our way back to the car (quick stop at the candy store!), drove home, and pretty much went straight to bed!

Sunday was a pretty productive day, and then GG’s brother invited us over for dinner because he was grilling some chicken, ribs, and veggies (not sure what he would have done if we hadn’t come over!). It was so nice out, I even voluntarily ate outside! We ended up watching/making fun of Terminator Genisys before heading home to bed. 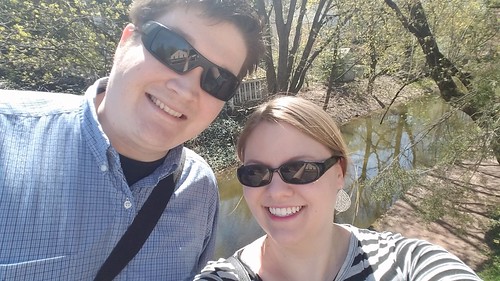