Didn’t I say June was going to be crazy? Besides our anniversary/wedding weekend, here’s some highlights so far:

After the Independence Day holiday, my calendar is looking a lot more empty… At least for a few weeks!

I blame my blog friend, Product Junkie in the City, with my new found interest in subscription boxes. I’m not signing up for a ton of them, but I love reading about her experiences! I did get a couple low-risk ones recently, though. If you’ve been considering joining one of these services, My Subscription Addiction is a great resource – they have boxes listed you never even knew existed, with useful reviews of each!

I’ve gotten this one every year for the last several years. Of course, the Summer 2015 box is already out of stock, so when you hear that the next one is available, you have to grab yours quick! For $5, it’s always a great value! 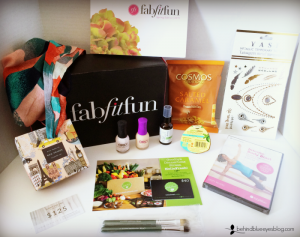 The main selling point for me getting this box was that you can order it after they reveal what’s in it. The Spring 2015 box had a few things I was excited to try, and seemed like a great value! I’ve already been billed for the Summer box and I’ve seen a couple sneak peeks of what’s coming in that, so it should be along shortly. If you’d like to try FabFitFun, I’d love it if you could use my referral link – you’ll also get $10 off your first box! 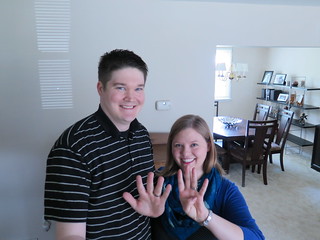 Can you believe GG and I have been married for nine years?! Usually we try to plan a nice dinner out or even a brief trip for our anniversary, but this year GG had already made plans to play in a band with our friend A at a Relay for Life event. So we had time for a quick (but nice) dinner at home before he had to drive to the event, about an hour away.

We decided to make reservations at Seasons 52, since it was nice and close by. I guess because GG said in the reservation that it was our anniversary, they brought us a little card, and a couple free glasses of champagne. 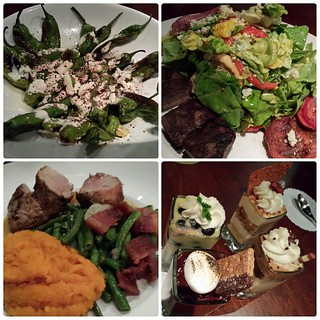 Our appetizer was amazing and something I need to re-create: blistered Shishido peppers with roasted corn, Sonoma goat-feta cheese, lemon aioli, and sumac. Apparently it’s a new menu item, and three different managers came by to see how we liked it. (We loved it! I’d just picked it on a whim!) Then I had the salad I usually get, GG had a pork tenderloin, and we each enjoyed a couple of the mini desserts :o)

Then on Sunday, we went to this wedding we were sort of accidentally invited to. So, funny story: I posted on Facebook about some cat food I couldn’t use, and a friend of mine from high school (she was a freshman when I was a senior) said she could take it, so we met up to drop it off. We talked for a while, and then she goes, “You guys are local, right?” and hands me an invitation to her wedding! My friend is Chinese, and apparently her parents were in charge of invites, and she was worried there would be “too many Chinese people” there! So GG and I ended up going, even though I was sure I would know nobody there. 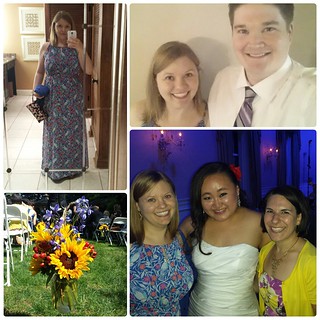 It was a gorgeous day for the little outdoor garden wedding, and they did a really nice job of incorporating Chinese and western traditions (her husband is not Chinese). When we sat down for the reception, I found that we were at a table of people from my high school, but because they were all three years behind me, I didn’t really know any of them. The girl sitting next to me was actually even younger than the bride, and we started talking about how we both knew her. I shared that I was her “band mom” in marching band, and this girl goes, “Oh, she was my band mom!” So that made her my band granddaughter!

Also, I wore a very cool maxi dress, so I didn’t even need to shave my legs ;o)