Ok, not children, but people who are ~10 years younger than me. Last Thursday I went out to my alma mater for an “Alumni Mixer” my fraternity was putting on. I hadn’t seen the current brotherhood for a while, and also a couple other alumni I knew were there, so it was fun to see everybody. My own lineage has apparently exploded, and it was so cool to meet these people who know me in name only! I learned that I am very unfamiliar with the music and dance moves of today’s young people (have you ever heard of “Bernieing?”). They were all really cool kids, and I had a great time meeting everyone. I had sent a (small, in my opinion) donation earlier this semester, and they were all so appreciative. They had even passed around a thank you card at a recent meeting for everyone to sign for me. I was really flattered. Hopefully I can do something else to help them out a little more this semester.

I knew I’d be getting home late on Thursday night, so I preemptively took Friday off work. Being the 15th of the month, I did have to get online to do one thing, and there was an inspection going on in the UK so I had to be on-call in case of any requests, but other than that I really did have the day off. After doing my one thing first thing in the morning, I got back in bed and… accidentally fell asleep until like 11:30 :o/ I finally did get up, did some errands, then… took another nap. Then it was time to get ready, because…

On Friday night, GG and I took the train in to Philly and went to Cheese 101! Remember a couple years ago when I said I’d like to go to a “cheese tasting?” Around that same time, someone recommended the classes at Tria, so I signed up for their e-mail newsletter so I could keep an eye on what classes were offered. Most of the classes I was not interested in (most are about wine, or wine and cheese pairings), or they were not at a convenient time. After a couple years of getting their e-mails, I was seriously about to unsubscribe myself from the one I received this week, when I saw it: Cheese 101 offered on Friday night, and we were free! I signed us up immediately! I’m so glad we got this opportunity. It was really a great experience! The class was two hours long, and was led by the guy who is in charge of cheese for Tria – he is young and really excited about cheese. We learned all about how different cheeses are made, and the history of how different cheeses came to be in different regions. Oh and we got to sample all sixteen cheeses currently on the menu at Tria. (I was especially proud of GG for trying all the cheeses, even the runny ones and stinky ones. I starred my favorites on the list; he ranked each one with a face.) It was really awesome.

We were thinking of going to Monk’s for dinner afterward, but all that cheese was really filling! So as we were walking back to the train, we thought we’d go to this Insomnia Cookies place we’d noticed on the way to the class. Then we made a last-minute decision to go next door to Honeygrow which seemed a little healthier and lighter. We’d never been there or heard of it, but I was intrigued by the touch-screen ordering system. We each ordered the honeybar, which is basically a bowl of fruit with honey on it. I had banana, strawberry, blueberry, and mango with wildflower honey, almonds, and Greek yogurt. It was a really neat idea, and the perfect (relatively healthy) way to round out our evening.

So it’s been another couple of moderately exciting weeks around here. GG contracted and then recovered from what I originally thought was a Man Cold, but when I actually took his temperature and it was almost 103, we decided maybe it was the flu. With the power of orange juice, Emergen-C, Tylenol, and a lot of couch time, he was totally back to his normal self within a couple of days. I felt like I might have started coming down with something (you know that feeling you get in the back of your throat, when you know you’re getting sick?), but luckily it didn’t pan out. Clearly, I have the stronger immune system.

Since she wasn’t able to get out much over the holidays, I took my grandmom to see “Les Mis” at the movies. This was the first movie she’d seen in a theater since I took her to see “Moulin Rouge” (and when was that? 1999?!). I took her to the one theater around us where it was still playing, and she got all confused because 1) there are 24 theaters, and 2) the screen is bewilderingly huge. But, she loved the movie, and was still talking about it when I went to see her the other day. I told her I’m taking her to see “The Great Gatsby” when it comes out, too – that’s one of her favorite books!

I did our taxes, finally… Usually I have everything done in February, but I was really dragging my feet this year.

As usual, I feel like there were a bunch of other things I actually wanted to write about, but once I sit down to write, I forget them all. I probably wanted to say something about how I read a book about saving on groceries written by “America’s cheapest family,” and either it was really dumb and common-sense, or I am a grocery genius, because I am already doing most of the things they recommend that it makes sense for us to do (as a family of two). I’m doing okay with my book-reading goal for this year, I think I should definitely be able to hit 25, especially if I read more books that interest me. If I’m just not into it, I drag my feet finishing a book, and that takes too long. I was hoping to be able to get more eBooks via my library, but they have kind of a limited selection, so it’s tough. But a friend just added me to her Amazon Prime account, so maybe I can get some good books from the Amazon Lending Library! Yay, technology!

Speaking of Amazon, I reluctantly ordered Nanobots… even though you can stream the whole thing online and I already heard it and wasn’t so impressed. But maybe it’ll grow on me. TMBG, what has happened to you? 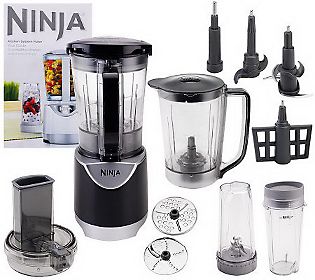 A few weeks ago, I was napping with QVC on (it’s great to nap to), and happened to wake up in time to see the Ninja Kitchen System Pulse. I’ve had the Ninja Master Prep for a couple years now, and it’s nice, but shortly after I got it they came out with the 3-blade version, so I’ve had blade envy (the two blades in mine never seem to reach everything). And with all the baking I’d been doing this winter, I kept thinking it would be nice to have something other than a hand-held mixer. This set was on special, so I went ahead and ordered it.

The main difference between this and the Master Prep is that they’ve gone to a more traditional blender/food processor design, with the motor in the base and a pitcher or bowl that sits on top. But there are no buttons on the base. The only thing the Ninja does is pulse, and you do this by pressing down on the lid of the container you’re using. This set comes with a couple different options:

I wanted to try it out right away. Here’s the things I’ve done so far:

Based on my experience with this and my other Ninja, here are my main tips: