We went to the Museum of the American Revolution to celebrate MB and R’s April birthdays … because we are all nerds! I loved it, it’s a very well designed museum. There’s a really good flow from one exhibit to the next, and it truly uses all senses – there are things to see, hear, touch, and even smell! (Ok, nothing to taste… yet.)

Even us history buffs picked up some new information there. Because I forgot to answer it for myself in the video, a fact that I picked up was that George Washington had a big butt and was self conscious about it!

Afterward, we got lunch across the street at The Little Lion, which I’d chosen because it came up in a search for “kid friendly” restaurants. What they meant was that it’s loud, so nobody will notice your noisy child. It really fit the “revolutionary” theme in kind of a hipster way, though – and they have cheese plates!

Spring has sprung suddenly, and I’ve been busy but having such a good time! 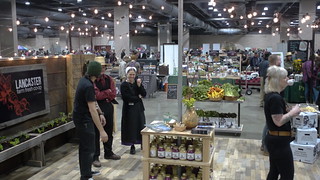 Last weekend, GG and I attended the Philly Farm and Food Fest – we had gone once before, a couple years ago, but every year it gets a little bigger. We took the train in to the Philly Convention Center, and got in right when they opened, so we could sign up for the speakers we wanted to see. Between presentations, we spent the entire day wandering around the aisles of vendors. This year’s show also featured a “curd convention,” where they put the cheese producers all together in one area. Unfortunately, GG and I are not the only cheese lovers in Philadelphia, and the area was quite crowded. (Meanwhile, the “Local Libations Lounge” required an additional ticket, was sold out, and remained mostly empty the whole time – we would have paid extra for the cheese section if that’s how it was going to be!) We did get to see two Curd Convention speakers, though (which came with samples!): David Katz of Honeygrow; and Sue Miller of Birchrun Hills (makers of one of one of the most approachable blue cheeses, Birchrun Blue, which I’ve been a fan of since I discovered it at the Phoenixville Farmer’s Market a million years ago) with Aimee Olexy of Talula’s Garden/Daily/Table (who I was kind of prejudiced against because of our bad experience when we tried Talula’s Garden). Despite all the amazing samples, we still managed to keep LCHF for the day! (Mostly – we may have cheated on a bite here or there…)

The next day, we met up with our friend C at Seven Stones Cafe in Media to catch up. That place is so cute! We got there at a little bit of a busy time, but then it cleared out and we got to sit and have a nice talk. Since it was so nice out, we walked up and down State St. for a little while before heading home. 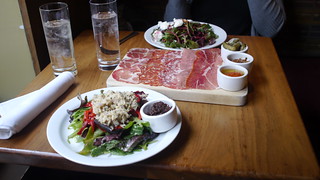 Yesterday we went to one of our favorite spots, Tria, to use my Christmas gift, a very generous gift card from GG (and we only used half of it, so we’ll have to back again)! It was perfect we got a meter parking spot right across the street, we got there at just the right time to have the restaurant to ourselves, and we were able to keep LCHF (I did have beets on my salad – don’t tell anyone!). The highlight, of course, was the amazing cheese board! My favorite was the Brillat Savarin, an amazing, runny, creamy cheese… I mostly linked it here so I know where to buy more ;)

For Easter yesterday, GG was invited to play guitar with his cousin’s church band, while I went to brunch with my family, and then we spent some time together back at my grandmom’s place. (Meanwhile, GG had been invited to his Greek friend’s house, where they were roasting a lamb on a spit!) Finally, we got back together at his parents’ house for Easter dinner – and some impromptu magic tricks from my brother-in-law!

In other news… I ordered a camera … but it was the wrong one … so I returned it, and then got the one I wanted used on eBay for half the price (but it’s in excellent shape). And now I’m trying my hand at vlogging :O

Had a nice Easter brunch with my family! Then a nice Easter dinner with my in-laws (featuring a magic trick – sort of – by my BIL!) … Then you can watch me sweep for a while, lol!

After we check in on the kitties … take a look at GG’s and my awesome lunch at Tria! 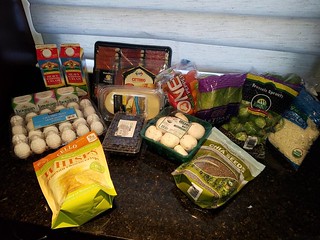 Doing the LCHF lifestyle, you’ll probably end up cooking from scratch more and eating out less, which is great – but it also means you’ll be shopping more for fresh groceries! We have a Costco membership but used to only go a couple times a year. Now I’m going every week or two, because with the quantities we’re using certain ingredients, it just makes sense to be able to buy them in bulk there. The prices are great, and they have lots of organic options too! Here’s some of the items I always pick up there:

Highlights of this busy, busy month:

Highlights of the last month of the year:

I was trying to get a few people over for a small New Year’s Eve dinner, but nobody was really available and then I got a really bad cold and decided I probably shouldn’t be handling people’s food, so now our plans include sitting on the couch in our PJs, and making s’mores with my new s’mores machine :)

How can I describe November? Disappointing? I fell asleep for a couple hours on election night and woke up to a crazy dystopia. We took 2 kitties to the vet and guess what, there is nothing physically wrong with the crazy one, he’s just crazy – so now he gets drugs :/ I did a big vendor event for my side business that had the most horrible load-in – luckily GG was able to meet me afterward and help me take things back out! Thanksgiving was nice and we had lots of family together, but meanwhile in GG’s family there was a medical emergency (everyone’s ok) and his dad and brother were in charge of making dinner, which actually turned out surprisingly well (we said they’re in charge of stuffing from now on). We went to MB & A’s annual Friendsgiving the week after, which is a little different now that everyone going has tons of kids running around. And I did my Christmas decorating early, since we’re having our holiday party earlier this year.

Highlights of this month!