I always love September – it’s my favorite time of year, and my birthday month! Some highlights this year:

Besides our impromptu trip to New Hope, we did some other exciting things this month:

This has been an extremely busy summer, due to some things that were going on personally, and some things going on at home. I actually apologized to the owner of my gym the last time I saw her – all my free time has been spent on these other projects, so I’ve been lucky to get there just once a week for yoga!

At work, I’m on this committee meant to plan team meetings, and provide engagement opportunities for the people in our department. (I call it the Party Planning Committee, but it’s actually more involved than that.) We had a quarterly all-site videoconference at the end of June, and someone had the idea that I should make a viral video to illustrate these virtual meeting best practices we’d come up with. Also, we wanted to do a potluck lunch on-site the same day, and guess who was in charge of organizing that? Well, both tasks went great! I wrote up a general script but had an amazing team of actors who really put their own spin on things and made the video hilarious! I took a couple days to edit it, and everyone loved it! Our potluck was also a really nice time, and everyone said it was one of the better “networking” activities we’ve done. And, with my friend JK about to go out on maternity leave, we threw a little baby shower for her, which was also a hit!

For the first time in a long time, I was free on the 4th of July, so J and R came out with their boys and checked out the little carnival my town had set up this year. We didn’t stay for the fireworks, but the weather was beautiful and I really just wanted some funnel cake. Plus it was nice to hang out with friends, and baby J is so cute! (A woman passing by as I held him said, “Oh he is such a little bubble!”)

GG and I had the opportunity to go to New York City for the day – then the opportunity didn’t work out, but we decided to go up anyway! I get free admission to a bunch of museums and stuff thanks to my employer, so we took the subway, walked through Central Park, spent a few hours at the Met Museum, and then got dinner at a place I found online, Cafe D’Alsace (surprisingly generous cheese portions!), before going back through the park, getting the subway back to the bus, the bus back to the car, and driving home. It was a little warm, but overall a really nice day.

Not content with one cheese board in a week, we took the train in to Philly a couple days later to use up the rest of the Tria gift card GG gave me for Christmas. This time we went to their Wash West location, and I think I like it more than the Rittenhouse one! It’s just as easy to get to from the train (maybe easier) and slightly larger and less cramped. Also they have a waiter who looks like Dave Navarro (?).

In the next couple weeks, a lot of the craziness should be over… until new craziness begins, I’m sure. But hopefully we’ll at least get to enjoy the end of our summer! 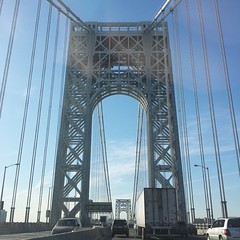 March started out with a short business trip to CT for a few days. I drove up and back with two of my good friends and coworkers, which was a lot of fun. We were there for our annual all-hands departmental meeting, and it was the most fun one of these we’ve ever had. As of last year, we have an “engagement team” and they organized the meeting and other activities, and everyone seemed to have a really good time. And of course, it was great to see a lot of my coworkers who I don’t often get to see in person.

We got home just in time for our learning event to start, so I was busy for a couple weeks helping out with that. Our contractor C was in town for the first week, so I was out to dinner with her most evenings. And she’s getting married this summer, so we decided to throw her a little wedding shower while she was in the office, which was really fun, and she was totally surprised :o) 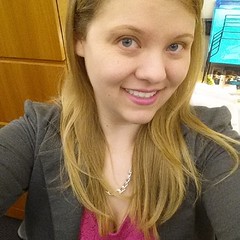 My other big work thing was that a major system we use was getting upgraded, and I am on the “change agent” team for my department. That ended up taking over my life for a couple weeks as I did demos (for individuals, small groups, and hundreds of people!), prepared, answered questions, rewrote procedures, etc. I will be so happy when everything is up and running! I got lots of great feedback about my work on the team, though. This is one of the first really “high visibility” things I’ve done, so I’m glad it’s gone so well.

Lots of new places are opening up in our town. MB came out and we went to the new Container Store on its opening day. It was actually kind of disappointing – very crowded (as I’d expected), the products were fairly expensive for things that weren’t really that unique, and there wasn’t really anything special going on for the “grand opening.” We had a fun day hanging out, though! And the new Chipotle is finally open! It’s in a horrible location with almost no parking, so it’ll probably start to frustrate me, but it’s nice to have somewhere that I can get a burrito bowl without having to cross a river.

OMG, another month went by without any other blogging! I know February is the shortest month, but seriously it feels like it went by in a flash!

The main theme of February I guess was the nonstop crazy snowstorms that affected everyone! Luckily, our power never went out, but lots of our friends had outages. The power was off at my grandmom’s house for a few days, so she came to stay with us for a little while, which actually was kind of fun. The snow also meant we stayed in more than usual, so I got to watch the Nye/Hamm debate live online over dinner, and we didn’t go out for Valentines Day. Instead, I attempted to make us a really nice dinner at home. It was good, but… did not go as planned. I made steaks with this chocolate/chili crust on them, and I found directions for starting steaks in a pan and finishing in the oven. Unfortunately, these types of recipes do not account for chocolate/chili crusts, so it turned out to be a horrible mess. (It was delicious in the end, though.) Thanks to the snow and power outages and whatnot, GG had several comedy shows cancelled (even one that I went to see!). And, because of the snow and holidays and various days off, I think it wasn’t until the last week of the month that I actually worked five consecutive days from the locations I was expected to work from!

We’d planned this out a while ago, but finally on Presidents’ Day weekend, we went to Ikea and got stuff to clean up and organize GG’s office/studio like he’s wanted. We added a tall bookcase, and swapped out his old desk for one that aligns with his existing desk, so it’s like one continuous surface. Next up: my office!

Speaking of my office, not that anyone really cares, but we just got “upgraded” to new laptops at work with Windows 8, and I hate it. For being the resident “techie” person, I’m kind of a curmudgeon when it comes to major changes like this. The computer itself is nice. It’s a touch-screen, which is annoying, but whatever. The Office 2010 software is an improvement over Office 2007. But Windows 8 is really not for the business environment.

We saw Wolf of Wall Street on Presidents’ Day (had wanted to go a couple weeks earlier, but even the movie theater lost power in the snowstorm!). It was so good. Much better and funnier than I’d expected, and I was pretty proud of myself for catching the references to The Graduate.

I’ve been continuing my yoga class at the gym, and I really wish they had yoga more than once a week! I tried a special class they offered called ABsession, which nearly killed me. The yoga is so much more my speed :o)

The month ended with the first of a string of important work events. This was a multi-site meeting that I helped to run at our site. Despite a few technical difficulties, everything went well here and we got lots of good feedback from the senior leaders who attended. Learning Week 2014 Part 1 here we come…

So what else did I do this month, besides trying on clothes and putting cats to sleep?

Well, the month (and year) started out awkwardly, at a really weird New Year’s Eve party at which GG was supposed to perform comedy. It was a “black and white” party, so we had to dress in just black and white (I cheated and wore gray boots). The event promoter who organized it did kind of a terrible job, so while it was a beautiful venue with lots of food, a bar, a band, and comedians at the ready, nobody actually showed up until about 11 PM, when just a few people started trickling in. We thought we’d be done well before midnight, so after waiting around for hours, all of a sudden it was time to hurry up and tell jokes (which did not go well), and then we took the other comedian home, and then it was midnight, and then we went home.

As has become our annual tradition, GG and I took a day off work and went to the Farm Show in Harrisburg with our friends L and S. We hit up the food hall first for an invigorating morning milkshake, then toured around the whole complex (we even found a new spot we hadn’t known about before, which was full of vendors!), then went back to the food hall for lunch before heading out. I think we ended up buying more “stuff” this year than we have in the past – GG got some wine, I bought some cheese, GG has these meat sticks and things he likes and has to pick up every year now, they’re now selling nuts so GG got a big bag of black walnuts, I bought some kind of hair accessory… Oh, and the new hot item of the show this year, the bacon? I was a little disappointed.

I got a bad cold (my first one in over a year, maybe?) just in time for this all-day training thing I had to be in at work. I just chugged tea all day and was miserable. I just couldn’t shake it, but luckily we also had plenty of snow days from work so I could get some extra recovery time at home.

I started going to a yoga class that I really like. It’s like regular yoga, except sometimes we hold hand weights.

American Horror Story ended, meh. I mean, I guess the right people lived and died, so that’s good. But it was barely “horror,” and there was nothing really that shocking. I hear the next series will be about communism in the 1950s, so I’m curious to see how that goes. I also binge watched the first two seasons of Girls one weekend while I was sick, and we have HBO for free until April for some reason, so I’ve been watching season 3 as it’s airing now.